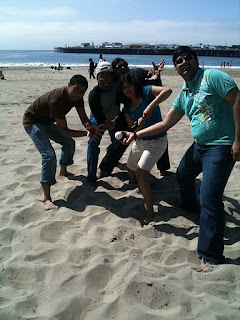 Another one of my ad hoc just have fun , on the spot plan that just cropped out of nowhere after a very tiring day at office and more tiring evening. I could go on and write so much fun we had the night prior, went to Dana Bazaar, then Walmart, Costco , Taco Bell , only to be picked up and informed that it was Haresh birthday and we have arranged a surprise party. 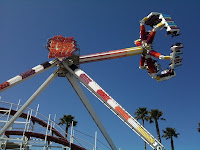 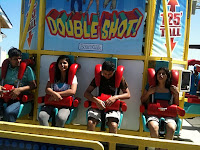 Anshu went to Neha's place to be joined by me, but the birthday plans took a longer than usual time, and by the time i was back it was 1115 PM and all miscreants have decided. As i Entered the place, there was a wicked smile all over. First to break silence was Vaishu, who told me about the plans. Next on the list I saw Vik , as he held his head high to my eyes, as if pleading guilty. The next in line was my sweetie pie Anshu, pleading guilty as if she has not done the crime. Already tired, but as my friends know, always up for adventure.
So Santa Cruz beach, next morning 8 AM. Plan and plan to execute right before our eyes. So after finalizing the trip details, we went right into our beds at respective places.

Venue: The lakeview Appartments , My place
Date 26 April.
Time : 6 AM .
Did I really sleep well , I am not sure. But pretty sure that if we have to leave by 8, this is the time to be. Landed up in shower and then in kitchen by 630 AM, trying to make sandwiches for all , as much as i can, only to find out that everyone has exhausted all supplies of namkeen (snacks). Well , then decided to take the raw material itself.

Time : 8 AM
All set . Yes , amazingly all are ready and raring to go. Few things before we say it lets go, like some stuff to eat. So it was decided, me and Anshu head to Walmart while the rest go right through to the beach. After going through the Walmart , we reached the place at around 9 30 AM. 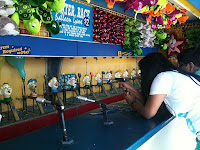 The weather was cool , and there was chill in air despite the bright sunlight that was making the sand golden brown, there was not a foot in water. So we started with the beach masti .
Volleyball : with 3 a side game, it took us few brutal blows and running around too much that after 30 minutes of play, we decided to call it off for volleyball.The next on the cards was baseball, which was more fun and better suited to wonderful conditions. Few pics were clicked and then we proceeded towards the destination water. It has been like 1030 AM, and the water still was chilly for us to go in. however we dared and started playing freesbie, when out of blue, Anshu caught a living crab in the fresbee (pics ). It was as big as palm of human hand and had very sharp claws. We played with it like we are playing with a kid, but careful. One sting and we will be back hospital. Once we were satisfied with the game, me and Anshu went back to throw it back in sea. We had to go a bit deeper just to make sure that it does not come back.
Once we threw it back, no one in our group ( other than me and An ) went to bay again, such was the terror of king size crab, which could have easily made its way to 30$ platter.
Next on the cards was kite flying , and once we all were done with it, we just tied the kite to a holder and laid down in sun. The kite was on auto pilot mode and never dwindled. Seemed like we just had used a adhesive in the sky.
Lunch time, and within seconds An was in water. Then got a sandvich for her and went with her to the water. Jumping and playing, wading off the waves, breaking the big ones and riding on the small ones, we had our natural salted moist sandvich. We felt as if we owned the sea, we felt as if nothing is there to separate us, but then a voice from back to pack the things up. We sneaked in just little more time to get back to water once more.
The day was still not over. We wanted to go on for roller coaster rides. But hard time deciding , lunch or rides. Rides won. Next few hours were the roller coaster rides, followed up by evening snacks.
Next was arcade games, and we won like few teddies, tried boozuka and broke a few pins. The day was far from over, and water still not sufficient.
Neha suggested we go to Santa Clara downtown, we could say Yes, but our legs screamed and screeched ... No way. And we returned home, and saw the swimming pool. Me , Vikram , vaishu and An went into swimming costume only to realise that pathetic lakeview apt have locked out the pool for no reason and without any notice. But then proceeded to presidio and had a nice time in heated swimming pool and jacuzzzi .... went back home for a home made dinner and  3 idiots to seal off the tiring day.
Posted by Deepak Gupta at 5/13/2010 02:11:00 AM